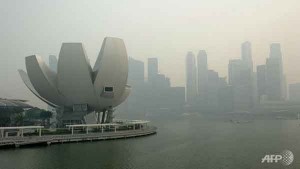 As the haze in Singapore creeps up to over 400, Emeritus Senior Minister Goh Chok Tong has declared that the “the Singapore Child is being suffocated”. In his latest Facebook post, he asked how can the child not scream?

Mr Goh noted how former Malaysian Prime Minister Abdullah Badawi used to say that Malaysians and Singaporeans are like neighbours living in a pair of semi-detached houses. Mr Goh said that what each does will affect the other. “So we have to be considerate in our behaviour, like not putting on the TV too loudly or burning our garden refuse openly if the smoke will enter our neighbour’s house,” he added.

Indonesia, said Mr Goh, does not share a semi-detached house with Malaysia or Singapore. However, he said its detached bungalow is in the same housing estate. Thus, Mr Goh said Mr Badawi’s analogy of neighbourly behaviour still applies.

He added that Sumatra is a big place and forest and peat fires are not easy to put out, unlike lallang or bush fires, which are small and confined. “They burn and smoulder over thousands of acres in remote places far from the reach of fire fighters,” he said.

Thus, he said it is best to prevent man-made, illegal fires from being started in the first place. But as of now, Mr Goh said that “the Singapore child better learn to survive the tortuous smog and haze.”

Please, with their forest size, they should be the whole estate next to us…