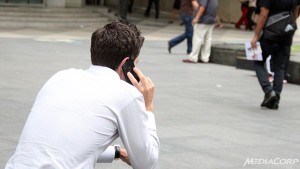 After registration opened at midnight on Sunday, tens of thousands of consumers — who have had to put up with unsolicited phone calls, text messages and faxes from telemarketers — rushed to list their telephone numbers with the Do Not Call (DNC) Registry.

As at 6pm on Monday, more than 67,000 unique telephone numbers were listed on the registry, which comes into effect from Jan 2.

A Personal Data Protection Commission (PDPC) spokesperson reiterated that there was “sufficient time” for consumers to register their Singapore phone numbers before the date of implementation, and they can continue to do so thereafter.

Those who had registered on the first day said they were fed up with annoying tactics used by telemarketers.

Nanyang Technological University (NTU) student Kenji Kwok, 22, said: “If there is something I need, there’s the Internet that is readily available for me to sort out my options.”

Jael Chng, 35, a communications professional, added: “I’ve unsubscribed multiple times only to find myself getting the messages again.”

Ngee Ann Polytechnic student Lim Hui Jie, 19, welcomed the DNC as “a very good initiative, especially for students who don’t have the money to purchase the product or service” being advertised. He added that he has received unsolicited messages from credit card firms and a telecommunications company.

This was to allow organisations “time to familiarise themselves with the requirements of the DNC registry,” the PDPC said.

Under the Personal Data Protection Act 2012, organisations will have to check with the registry from Jan 2 to ensure that the Singapore telephone numbers they are contacting are not listed there.

In order to do so, they are required to set up an account and submit their lists of telephone numbers.

They can continue sending telemarketing messages to registered consumers if they have obtained the latter’s consent.

There will be one-time registration fees of S$30 and S$60 for local and foreign organisations respectively. Five hundred free credits will also be given each year — with one credit deducted for each number checked. This is to help firms, especially small- and medium-sized enterprises (SMEs), lower compliance costs.

Registration for consumers is free.

Organisations can still send non-telemarketing messages such as those relating to surveys or customer service.

Sales manager Leon Neo, 34, who has yet to list his telephone number with the registry, felt that there are loopholes that could be exploited by telemarketers.

“An organisation could call on the pretext of making a ‘service’ call and proceed to market their products afterwards,” he said.

The PDPC reiterated that “consumers also have a role to play to protect their personal data”.

If there is a potential breach, consumers may first approach the organisation, failing which they can complain to the PDPC.

Lisa Watson, chairman of the Direct Marketing Association of Singapore, said that with the registry, companies would have to establish “what level of consent they have from their customers”.

She noted that the personal data protection requirements will affect SMEs more, as bigger companies such as multinational corporations could already have safeguards in place.

The smaller firms face “a challenging learning curve” which will require them to put in place “a very clear process” to ensure that they comply with the law, she added.

Why Beer is Always Good, They are the Best

Weird Creature around the World – Monodon Monoceros aka Narwhale