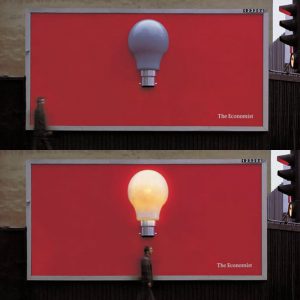 For those who don’t know, The Economist is an English-language weekly newspaper based in London. They are known for their witty articles, so it doesn’t come as much of a surprise that they decided to take a smart approach when creating their billboards.

Other than the fact that this billboard is visually aesthetic – its minimalism is brilliant. Having a giant light bulb with a motion sensor built-in is bound to make you look twice.