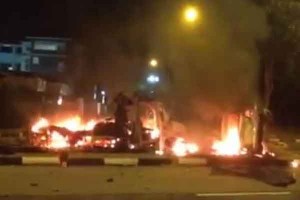 At least three busloads of police officers in riot gear responded to a riot that broke out along Race Course Road in Singapore around 10pm on Sunday night.

The mob, believed to be made up mainly of foreign workers, apparently attacked an ambulance and a traffic police highway patrol car responding to an accident earlier in the vicinity.

Singapore’s The Straits Times understands that a Bangladeshi worker was hit by a bus earlier and first responders were believed to be attending to the victim when the riot started.

According to preliminary reports from the ground, two vehicles were set on fire, an ambulance and a police car. A few police cars were also overturned.

At least two explosions occurred at the scene involving the vehicles.

Police have cordoned off the entire Race Course Road as they try to contain the situation.

A section of the shops along Buffalo Road have been ordered to close their shutters.

Firefighters were seen putting out flames that had engulfed the two vehicles, believed to be an SCDF ambulance and a police patrol car.

There were at least four police patrol cars which were overturned along the road.

A minibus which is believed to have collided with a civilian vehicle is further down Buffalo Road.

As at 12.03am Monday, all the rioters appeared to have dispersed, but riot police could be seen combing the area.

Crowds who were earlier cheering the police were still milling around.

Residents in the area described the scene as “havoc”.

One resident said at one point he saw about 200 men surround the minibus that was involved in the accident.

The Singapore Police Force tweeted at 12.26am that it was in control of the situation on Race Course Road and Hempshire Road. It advised the public to stay away from the area.

I think after this incident. Singaporean really need to think about the ban of alcohol is certain area. But do remember that banning in certain areas means that people will just move to another place to drink. It will be the same.

Ever Wonder How Alcohol Makes Anyone Looks Better?