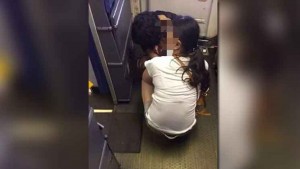 Wow, seriously, after stories of Chinese shitting in our MRT dustbins, we have this…

Passengers onboard a Shenzhen Airlines flight ZH9709 from Nanjing to Guangzhou on Sunday, 16th Aug 2015, complained that two parents allowed their child to defecate in the back of the cabin.

This happened despite both bathrooms on the plane being vacant at the time, according to witnesses cited in a NetEase News report.

A flight attendant reportedly saw the child soiling the area in the back of the cabin before the plane took off, with the mother and another relative happily propping the kid up as if they were in a squat toilet.

When asked why she didn’t get the child to use the bathroom instead, the mother answered, “Your bathrooms are too small, the three of us can’t get in. It’s so spacious out here!”

Grossly enough, this isn’t the first case of its kind. A Chinese family made headlines last summer after they reportedly allowed their child to do his business in the cabin aisle of a Delta Airlines fight from Beijing to the US. In 2013, a mainland Chinese mother caused a scene after she was photographed letting her son take a squat on the floor at a Taiwan airport.

Chinese tourists don’t necessarily have the cleanest track record when it comes to non-poop-related travel horror stories, either. Man Found Dead in Flat after Fire Breaks Out