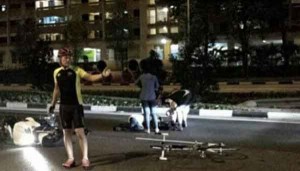 Police have identified a driver in an alleged hit-and-run accident after the motorcyclist involved put up an online plea for help in tracking down the culprit.

In a Facebook post on Sunday, user Dee Huny had appealed for witnesses to step forward, after she and her pillion rider were injured in the accident which happened last Friday night along Telok Blangah Road. Pictures of the abrasions sustained by her and her friend were also uploaded, as was a plea for witnesses to “please come forward with more information”.

The motorcyclist said she had been hit by the left side of the car, which dragged the bike for a few metres. The car slowed down at first but then sped off. Both the motorcyclist and the pillion rider, who were conscious, were taken to Alexandra Hospital.