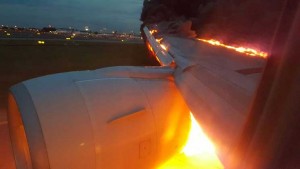 A Singapore Airlines (SIA) flight to Milan caught fire early Monday morning (Jun 27) while making an emergency landing in Singapore, but all passengers on board escaped unharmed.

Flight SQ368 departed Changi Airport for Milan at 2.05am on Monday. The flight was forced to turn back to Singapore after an engine oil warning message, SIA said in a statement.

The plane’s right engine caught fire after the aircraft, a Boeing 777-300ER, touched down at the airport at around 6.50am, SIA said. Emergency services put out the fire and there were no injuries to the 222 passengers and 19 crew on board.

Passengers told Channel NewsAsia that the flight turned back about two-and-a-half hours after taking off due to a fuel leak.

Ms Lee Bee Yee, who was onboard the flight with her husband, said there was a strong smell of fuel on the plane.

“The pilot said he was going to turn back because the engine is leaking oil on the right side. The captain said that they cannot turn on that side of the engine or else the plane will be vibrating. And they can’t fly like this to Milan… That’s why they turned back,” she said.

“We were sleeping and didn’t think too much about it,” she added.

After the plane landed in Singapore, the passengers cheered and clapped. Then, there was a spark and there were “huge flames” coming from the right side of the plane, she said.

Mrs Mamta Jain, whose husband Amit Jain was on board the flight, told Channel NewsAsia that the right wing of the plane burst into flames after the plane landed.

“When they landed, he said the engine was on fire and he could see flames. They were all inside the plane and they could see the right wing burning,” she said.

Passengers on board SQ368 were frightened but calm, according to passenger Lee Bee Yee. (Photo: Lee Bee Yee)
It was an agonising five-minute wait for the firefighters to arrive, she said. After they arrived, firefighters sprayed foam and water on the plane and the fire was put out in about five to 10 minutes, she said. 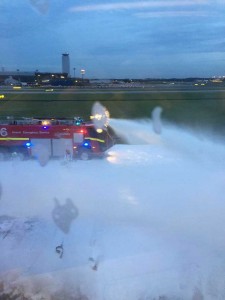 “Passengers disembarked through stairs and were transported to the terminal building by bus. Passengers will be transferred to another aircraft which is expected to depart for Milan later today,” the SIA statement said.

The airline said it will be cooperating with the authorities in their investigations.

Man Found Dead in Flat after Fire Breaks Out