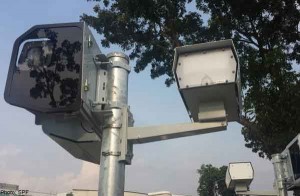 The Traffic Police are installing new digital cameras to nab motorists who break speed limits. The cameras – similar to the ones deployed at junctions to catch red-light runners – will be put up at 20 locations for a start.

Most of the spots are on expressways and main arterial roads. Like the 240 digital cameras installed or to be installed at major traffic junctions to crack down on those who run red lights, these cameras are sharper and more accurate than the film cameras.

They also allow police to download images at a central location and send out summonses in a far shorter time than the analog system did. Police said the installation started last month and will be completed by the middle of next year. “These new digital cameras have enhanced vehicle detection abilities and coloured images to better identify vehicles that speed,” said a spokesman.

“There will be no need to reload and retrieve wet-film negatives, allowing these cameras to remain ‘live’ 24/7.”
In addition, he said, the ability to download images remotely allowed “faster processing time to give timely punishment” to those who break the speed limit. Speeding remains the top offence on Singapore roads, with more than 200,000 summonses issued each year. That number could rise sharply, going by the increase in red-light summonses issued since digital cameras were installed from March. Between March and September, 25,833 tickets were issued – 37.4 per cent more than the 18,796 issued for the whole of last year.

Retiree and motoring enthusiast Lee Chiu San, 67, said he is all for speed cameras but not speed traps. “If it’s an absolutely open road with a long down slope, and there’s a policeman hiding at the bus stop or on the overhead bridge, then I think it’s not right.”

Sales manager Brian Ho, 53, said: “Enforcement is fine, but we should also (work on) education. When I drive in Australia, I see billboards by the road telling people of the dangers of speeding.”

Critics question the effectiveness of speed cameras, in the light of the high number of summonses issued yearly.
But a recent University of Melbourne study showed that there is evidence that cameras do work in improving road safety.
Using data from the city of Edmonton in Canada, the study found that “catching offenders had a significant effect in reducing injury crashes” – more so than police presence on the road.

“The apprehension of offenders is therefore a key component to maximise the effectiveness of the speed camera programme and not solely a means to raise revenue,” wrote Associate Professor Richard Tay of the university.

Fare-distances of Bus Services not found on Official Mobile Apps and...