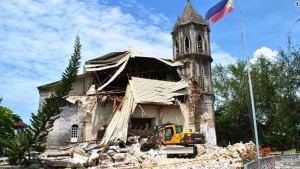 A magnitude-7.2 earthquake struck in the central Philippines on Tuesday morning, killing 82 people and severely damaging some of the country’s most hallowed churches, authorities said. The earthquake hit at 8:12 a.m. (5:12 p.m. Monday ET) less than a mile from the town of Carmen in Bohol province, the U.S. Geological Survey and Philippine emergency authorities said. Carmen is in a remote region across the Cebu Strait about 40 miles from Cebu City.

The NDRRMC had initially put the death toll at 28, but police told the Associated Press later on Tuesday that the figure had risen to 82. The NDRRMC said 159 people were reported injured. Two buildings and a fish port collapsed in Cebu City, the Philippines’ fifth-biggest city and one of its leading tourist destinations, as did the roof of a mall under construction, authorities said.
Part of Cebu Doctors’ University in Mandaue City collapsed, the Manila Bulletin newspaper reported, and the bell tower was destroyed at the Minor Basilica Del Santo Niño in Cebu City. Most of those killed were hit by falling rubble, the agency reported. So far, nearly 2.9 million people from 560,000 families have been affected.

Dozens of people were missing, and authorities were checking into reports of people trapped in collapsed buildings in Cebu and Bohol, the agency reported. Landslides were reported in Cebu, according to the disaster council, which also reported stampedes at two venues in that province, as well as damage to a port terminal, an airport tower, a fish port, a public market, schools, churches, hospitals, bridges, roads, government buildings and residences across Bohol, Cebu and outlying areas.

The quake was centered about 620 kilometers (385 miles) south-southeast of Manila, near Catigbian, and its depth was 20 kilometers (12 miles), according to the U.S. Geological Survey. The Philippines disaster council gave the temblor a slightly higher rating, 7.2 magnitude, than the USGS. 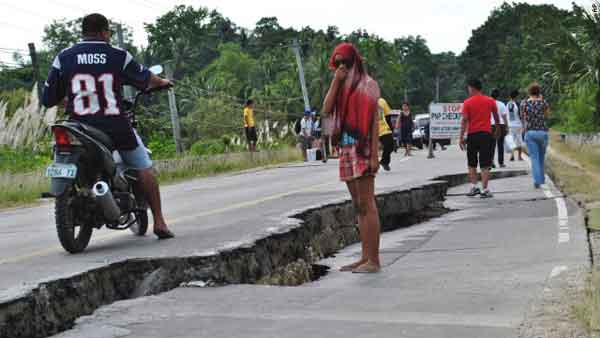 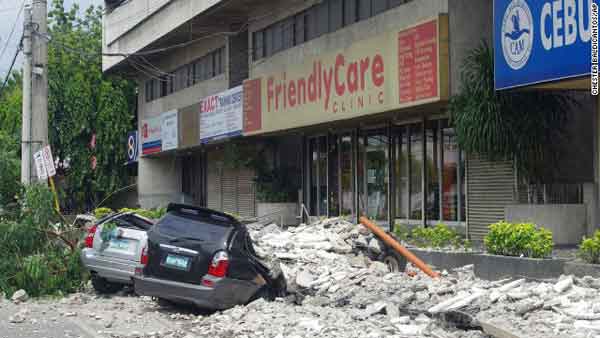 The Loboc Church in Bohol, built by the Spanish in the 17th century, was toppled. The centuries-old churches of Baclayon, Loon and Dauis, also in Bohol, sustained significant damage, provincial Gov. Edgar Chatto said. People walk past the damaged Church of San Pedro in the Philippine town of Loboc in Bohol province after a 7.2-magnitude earthquake struck the region Tuesday morning.

Power was reported out across Cebu City and Masbate and Bohol provinces, the official Philippine Information Agency said. The Philippine Red Cross asked people in the region to use their phones only for emergencies so first responders and rescue operations weren’t hampered. 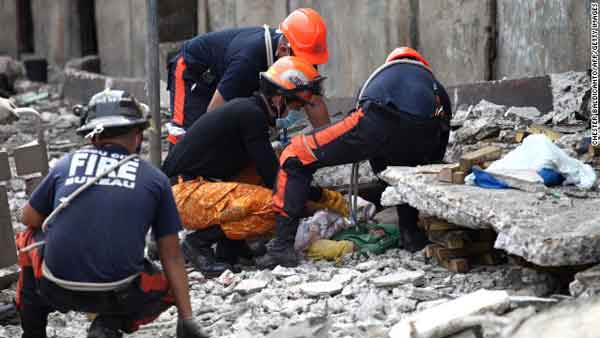 Civil defense officials said casualties may have been reduced because many businesses and schools were closed Tuesday for Eid al-Adha, the Muslim Feast of the Sacrifice, which is a national holiday.

Lt. Gen. Roy Deveraturda, chief of the Philippine Central Command, told the Daily Inquirer national newspaper that he had recalled soldiers from their holiday furlough to respond to the quake.