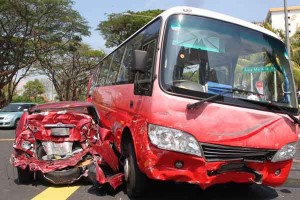 Today is a sad day, our hearts are with the affected families. Please ride and drive safely and keep our Singapore roads more safety.

A 59-year-old tipper truck driver was arrested yesterday after a motorcyclist was killed in a horrific accident involving a tangle of six vehicles at the junction of Ang Mo Kio Avenue 6 and Avenue 1.

The man died after his motorcycle was sandwiched between the truck and a private bus in the incident that occurred just before 10am at the busy intersection close to Bishan Park. A lorry and two other cars were also involved in the accident, which led to a road closure, for more than three hours, of about 290m on the northward stretch of Ang Mo Kio Avenue 6 from the junction until Ang Mo Kio Street 24, affecting one bus stop handling eight bus services.

In an interview with TODAY about three hours after the accident, truck driver Soh Choon Seng said he was carrying garbage to Defu Lane from Tagore Road when his brakes failed along Ang Mo Kio Avenue 1, just before the traffic light, which had turned red. His truck then ploughed into four other vehicles that had stopped in front of him.

Mr Soh, who started work at Boon Poh Refuse Disposal on March 28 and has been a driver for 20 years, was arrested later in the day for “causing death by negligent act”. The collision caused a mangled mess, with one car, the motorcyclist and his bike crushed between the bus and the tipper truck. The other car at the head of the convoy was spun round by the impact into the right side of the bus.

Bus driver Chua Mui Hong, 50, told TODAY he did not see the truck coming “because my vehicle is tall so you can’t see what’s behind”. He had stopped for less than a minute when the accident happened, and several pedestrians had just crossed the road in front of his vehicle.

Mr Chua realised a motorcycle was hit only when he got off his bus to survey the damage. He said in Mandarin: “I didn’t see anyone under the bus, so I walked to the right of the bus and saw two legs sticking out horizontally.”

Mr Chua then stopped — he could not bear to get closer.

Mr Soh said the motorcyclist flew off his bike and got wedged as the tipper truck slammed into the bus, trapping the car underneath it as well. “There was no way I could save him,” he added.

The accident drew onlookers, some of whom ran to the aid of the car driver wedged between the bus and the truck, said Mr Chua. One broke the car’s window with a hammer to pull the driver, who was bleeding from the head, out of his crushed car. Mr Chua said he got an onlooker to call the Singapore Civil Defence Force, then called again himself to make sure help was on the way.

Speaking to reporters at Tan Tock Seng Hospital where they received treatment, both Mr Soh and Mr Chua said they suffered minor injuries. Mr Soh had cuts on his right leg, while Mr Chua said he hurt only his shoulder.

Mr Chua said he did not tell his family about the accident as his injuries were minor and he did not want them to worry. Mr Soh’s wife was at the hospital to accompany him to the Traffic Police Headquarters to give a statement.

Apart from the two men, the drivers of the other two cars were also sent to the hospital. One of them was warded.