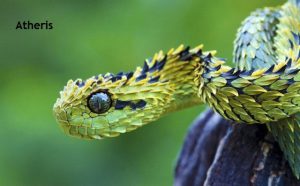 Atheris is a genus of venomous vipers known as bush vipers. They are found only in tropical subsaharan Africa (excluding southern Africa) and many species have isolated and fragmented distributions due to their confinement to rain forests.

They are relatively small in size, with adults ranging in total length (body + tail) from 40 cm to a maximum of 78 cm.

All species have a broad, triangular head that is distinct from the neck. The canthus is also distinct and the snout is broad. The crown is covered with small imbricate or smooth scales, none of which is enlarged. The eyes are relatively large with elliptical pupils. The eyes are separated from the supralabials by 1–3 scale rows and from the nasal by 2–3 scales.

The body is slender, tapering, and slightly compressed. The dorsal scales are overlapping, strongly keeled and have apical pits. Laterally these are smaller than the middorsals. Midbody there are 14–36 rows of dorsal scales. There are 133–175 rounded ventral scales. The subcaudal scales are single and number 38–67. The tail is strongly prehensile and can support the body while suspended from a branch or a twig.

Members of this genus come in an amazing variety of colors and patterns, often within a single species. A. ceratophora and A. squamigera are particularly variable. 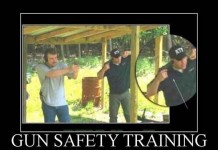 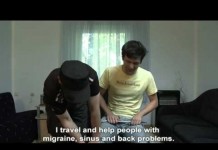