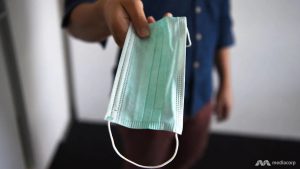 A person in Singapore to be charged for cheating mask buyers amid the current coronavirus outbreak.

Daryl Cheong Zhi Yong, 28, is now accused of cheating a total of six victims of about S$185,000 for more than 900 boxes of surgical face masks.

The new offences allegedly occurred between Feb 10 and Feb 13 this year.

Cheong now faces a total of 16 charges with six victims – five women and one man – involved. He allegedly cheated some of the victims more than once.

Other charges pertain to how Cheong purportedly dealt with the cash – he is accused of handing S$136,000 to two people for safekeeping, and using other portions of the criminal proceeds to buy pawn shop items such as gold jewellery and Rolex watches.

Deputy Public Prosecutor Jeremy Bin on Friday said the prosecution was ready to take dates for a guilty plea mention to be heard.

However, Cheong did not indicate whether or not he would plead guilty. The judge asked him for an update on whether he would engage a defence lawyer, as he had said previously that he wanted to do so.

Cheong said he had tried to apply for a lawyer under the Criminal Legal Aid Scheme (CLAS), but claimed that he could not do so in prison.

The prosecutor said he did not believe this to be accurate, as CLAS applications can be accepted whether an accused person is in remand or not.

Cheong, who has been remanded since he was first charged on Feb 15, said he first needs to be bailed out as his parents did not know how to engage a defence counsel.

He also asked for bail to be reduced from S$20,000 to $15,000, but the prosecutor objected to this, because of the seriousness of the offences and the quantum involved.

“My mom don’t have so much cash,” said Cheong. His two elderly parents were in court.

The judge varied bail conditions so that he will now only have to provide S$5,000 in cash bail, with another S$15,000 in property bail.

However, Cheong said his mother just informed him that she did not have S$5,000.

The judge gave him a week to engage counsel. The prosecutor said he also required a short adjournment to prepare the case, “by virtue of the national climate and the message that needs to be sent out not to take advantage of the coronavirus situation”.

Cheong will return to court on Mar 13. If found guilty of cheating, he faces up to 10 years’ jail and a fine per charge.