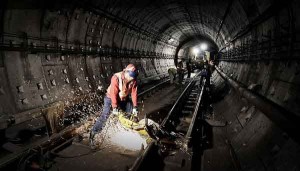 A corroded metal strip caused a rail crack between the Yio Chu Kang and Ang Mo Kio stations that delayed the peak-hour crowd on Thursday morning.

She added: “It could happen again, as it is symptomatic of aging rail infrastructure.” This crack which is the third in five weeks, is different in nature from the previous two which were on the welded portion of the rail.

“A discussion on an entire systems overhaul is being tabled with the Land Transport Authority. This overhaul is seen as absolutely necessary for system safety and reliability moving forward,” she added.

SMRT is considering to replace all the tracks. This maybe a good idea since it will provide safety. But the overhaul will cost an estimated of S$8 billion dollars. So… Brace yourselves Singaporean, you should all know what is coming…

New iPhone 5s, 5c to be launched Sept 20 in Singapore