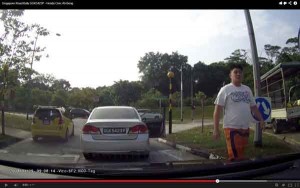 The Honda Civic driver who was caught on video chasing and taunting two other drivers on the same day has been pulled up by Police for questioning.

The driver had first been seen chasing after another driver and committing many reckless acts after a minor misunderstanding at a carpark.

A second clip showed the same car (SGK 5423P) tailgating and taunting another driver, just a few hours after the first incident.

The prior incident had happened on 9a.m. on Jan 29. According to the time stamp on the video the second incident happened at around 12:50p.m. on the same day.

The driver of the Honda Civic, Mr Quek Zhen Hao, had earlier identified himself on facebook as the driver seen in the videos, and explained his actions.

He claims the other driver pointed the middle finger at him, and that’s why he reacted.

Many had also posted the video clips on the Police facebook page.

In an initial post, Police said they were investigating the matter, before posting an update that the driver had been pulled up for questioning.

“The Traffic Police (TP) is looking into both of the online videos involving motor vehicle SGK5423P.

“We have since called up the driver of the said vehicle for investigation and would like the drivers who had recorded the incidents on video to come forward to assist with investigations too.

“They can either lodge the report at TP Headquarters at 10 Ubi Avenue 3, Singapore 408865 or at any Neighbourhood Police Centre (NPC).

“The police report can also be lodged online via the Electronic Police Centre at http://www.spf.gov.sg/epc/index.htm if they have a Singpass.

“Any other persons with additional information regarding this incident can also provide them to the Traffic Police via SPF_Feedback_TP@spf.gov.sg.”

Car Refused to Give Way to an Ambulance